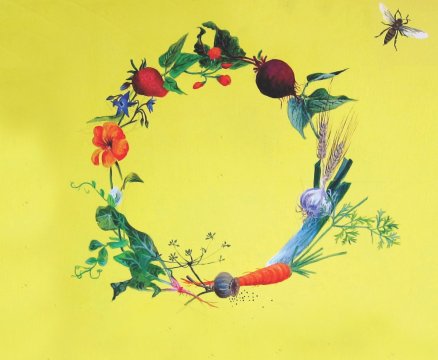 It was a cold, grey day in Glasgow but this didn’t deter over 150 people, from all over Scotland and the UK, who fought rain and winds, to arrive at St Francis Community Centre, to celebrate food for the common good at Scotland’s first ever Seed and Tree Festival.

The Seed and Tree Festival was spearheaded by Common Good Food, a charitable organisation, which was established less than a year ago, but which has already made its voice heard. Their mission is to be a ‘hands-on advocate’ for food sovereignty in Scotland, and to develop community capacity in food production by running practical programmes and training.

The three people behind the mission, Fergus Walker, Eva Schonfeld and Mags Hall, were shocked by the total absence of any commercial seed production in Scotland, and were motivated to organise a national seed gathering as a way to move towards greater seed sovereignty for Scotland. They decided to bring together growers and activists from across Scotland to explore how they could collectively build up and share their seed resources.

The day kicked off with a thoughtful speech from Fergus Walker, who spoke about why food for the common good starts with seed. He talked about seeds as ideas, which need to be shared in order to stay alive- a fitting start for a day full of networking and discussion. The programme included a varied selection of practical workshops and talks, and the organisers encouraged everyone there to keep returning to one central question, ‘What is Scotland’s living food culture and what do we want to pass on to our great-great grandchildren?’ They collected contributions throughout the day and are aiming to write a statement of intent created collectively by those who were there.

The London Freedom Seed Bank were invited to run a workshop on ‘how to run a seed library’ alongside Neil Munro from the Heritage Seed Library. I spoke about my experience visiting seed projects in America, to highlight the range of different ways a community seed project can work, and Neil gave practical advice on how to run a library, covering topics such as the importance of writing an Accession Policy to how to plan a grow out. About 25 people took part, and at least half of them said they were interested in starting a seed library, a clear indication of the potential for a community seed movement to develop.

In the afternoon, I took part in a lively discussion with those who were interested in establishing some kind of seed saving network. There were representatives from urban community gardens, rural crofts, as well as a couple of national organisations. There was a great deal of enthusiasm for pooling and preserving heritage varieties on a national scale, and also for promoting seed saving on local level through community projects. Everyone agreed that both of these strands would be needed in order to safeguard the past, whilst also building a more resilient future. The group knew little about who is already seed saving in Scotland and how and where they are doing it, and decided that a national audit must be the first thing on the to-do list. A working group was established to make this happen.

It was very inspiring to witness the energy and enthusiasm for seed saving, and feel part of the buzz. It will be interesting to see how the network takes shape over the coming months and year. The next steps appear to be in very capable hands with the folks behind Common Good Food, who pulled off their first festival with such finesse.